Find meeting notes, event photos and photos of Lee Dems in the community
in the Archive pull-down menu.

After Supervisor Lusk led an extensive process that included a study of the district’s history and multiple opportunities for community input, Lee District was officially renamed Franconia District with a unanimous vote by the Fairfax County Board of Supervisors on Tuesday, June 28, 2022. To reflect this change, Lee District Dems is renamed Franconia District Dems, effective immediately.

You can read the news release here.

“I appreciate Supervisor Lusk’s thoughtful and collaborative process to arrive at this new name,” said Kathy Rhem, chair of the Franconia District Democratic Committee. “This change comes at a great time for our committee, as our officers and dedicated volunteers have been working hard to redouble our efforts to elect candidates truly committed to liberty and justice for all.”

“Individual rights to personal reproductive autonomy are under attack from the extremist Republican party. The Trump-packed Supreme Court has overturned nearly 50 years of established legal precedence by allowing states to refuse an individual’s right to an abortion. Republicans profess to be the party of individual liberty, but they continually attack women’s freedoms and rights.
“This ruling does not end abortion in our country. Instead, it amplifies inequality. Vast swaths of the country will soon be thousands of miles away from reproductive healthcare, limiting access to those without the means to travel. Beyond that, regressive laws ready to go in effect in various states are seemingly meant to terrorize—forcing pregnancy on victims of rape and convening inquests for those who miscarry.
“Republicans sadly continue to have a dangerous relationship with the truth. Amy Coney Barrett, Brett Kavanaugh, and Neil Gorsuch all lied under oath about whether Roe v. Wade was settled law during their confirmation hearings. Their place on the court cemented by their lies, they have gutted Miranda rights and gun regulations, placed limits on citizens’ ability to seek damages if their constitutional rights are violated, and enabled tax dollars to go to religious schools.
“The overturning of Roe v. Wade reinforces the continued need for Democratic leadership to protect reproductive rights for Virginians and the importance of upcoming elections. The right to an abortion in Virginia hangs in the balance of one Senate vote. The Fairfax County Democratic Committee will work to elect those who will protect the right to choose in the Commonwealth.”

The high stakes for Virginia and the nation at large are driving Lee Dems, as affirmed by the membership poll taken in February and March. Debra Linick, co-vice chair for membership, said 41 people filled out the survey online, and a core group of volunteers spent long hours following up by phone.

Asked what motivates them to be Democrats, some said it’s been a lifelong commitment. Others are relative newcomers. More than one summed it up as “Trump’s election.” The environment topped a ranked list of concerns, followed immediately by preserving democracy and voting rights, and universal health care. Equality, workers’ rights and reproductive freedom were also among the many shared values. 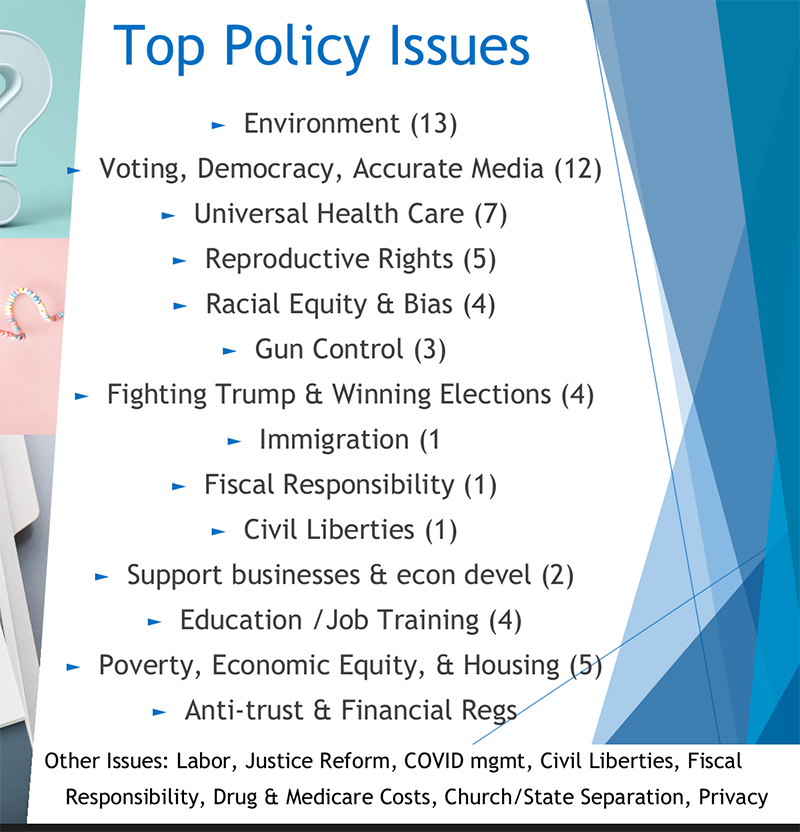